Anushik comes from a family of dancers and musicians; she breathes Armenian culture. She quickly became a sought-after dance teacher when she and her parents moved to Artsakh 15 years ago. Her dance group eventually became one of the best in the the Republic, winning competitions and even a bus (!) to facilitate transport.

When the Azeri dictator launched an attack on Artsakh on September 27, 2020, Anushik, her husband Aharon and two little daughters Elen and Gayane lived peacefully in Kovsakan, Artsakh Republic. They had several wheat fields, 30 heads of livestock, and had just built a self-serve carwash for their bustling community.

Aharon's brother, Monte, who had just finished his army service before the war, returned to his post immediately at the start of the war. Within a week, he was lost in battle. By October 20th, Anushik and the children fled to safety in Armenia, Aharon stayed behind to help with defence and look for his brother. By May, 2021, the Atken Armenian Foundation and the Syunik Development NGO created a Resilience Hub in Yegheknadzor thanks to a fundraiser by Professor Dora Sakayan of Montreal; Anushik was selected to be our dance teacher. "I am happiest when I am teaching" Anushik told us in a recent Messenger interview, "the children and I truly energize each other, we feel safe and proud." Indeed participation has grown to three groups of 25 students. Many of the Artsakh refugees have returned home, but several, who lost everything, like Anushik and her young family, remain in the Vayots Dzor region. Today, about 10 children in our dance group are children of Artsakh.

It took 10 months to finally determine Monte's fate; DNA testing determined that he was killed in action defending his homeland and his community from the Turkish-led genocidal onslaught. Monte received the highest honours from the President of Artsakh.

Today Anushik and her husband start from scratch with a little help from the AAF. Let's make her job a full-time one. Contact us to know how you can help. A monthly donation of the cost of a restaurant meal in Montreal for a family of four, will allow 25 students to receive top quality dance lessons in their community. Who will step up? Contact us today. 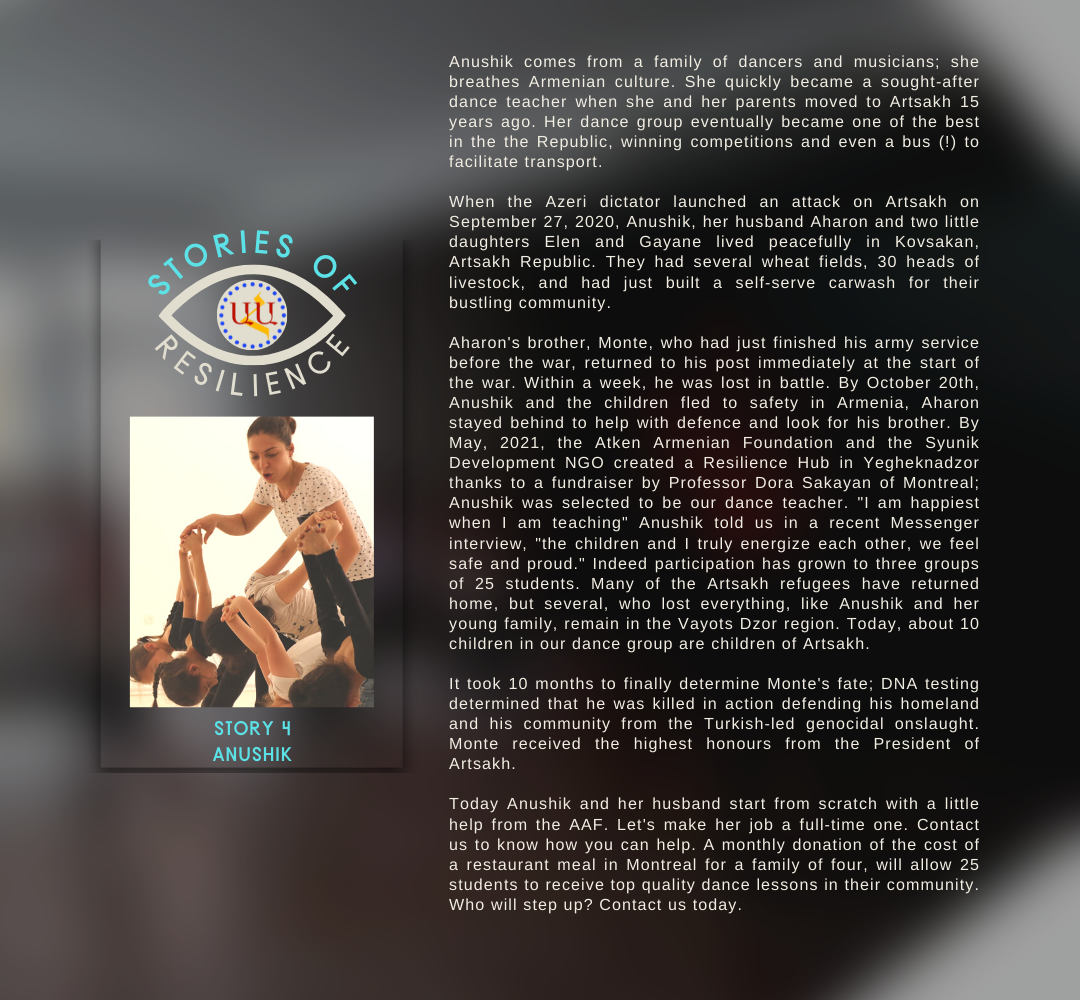